skip to main | skip to sidebar

Happy Thanksgiving! The Following Is A Message Ffrom The Tukeys Of America 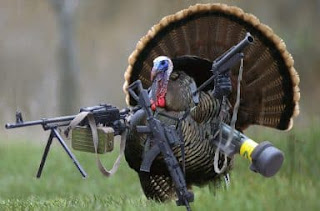 Posted by Blackthorn D. Stick at 12:34 PM No comments:

Posted by Blackthorn D. Stick at 12:36 PM No comments:

One is dead, and police have already identified and are looking for the other two.  The Gun Store owner, a 79 year old Army Veteran, was uninjured.  The thieves made a major mistake when they started shooting when he showed up and caught them in the act.

Posted by Blackthorn D. Stick at 9:24 AM No comments:

Maybe Not Practical For A Real Life Confrontation, But DAMN!!!

The Incomparable Bob Munden at his best!

Posted by Blackthorn D. Stick at 2:20 PM No comments:

WHOOPS!! It Appears He Didn't Think This One All The Way Through....


Posted by Blackthorn D. Stick at 8:48 AM No comments:

I've put this one up before, and I'll probably put it up again at some time in the future. No Bullshit, just practical preparations for what you are most likely to face in the 21st century.

My advice for people who want to prepare for realistic violence, financial upheaval, and various and sundry natural disasters. Consider it my response to having just checked out a popular "Warrior" style forum and seen the wallet draining bullshit that passes for "must have" knowledge to survive the 21st century.

1) Don’t do stupid things, hang out with stupid people, or go to stupid places.

2) Pay attention to what's going on around you, and learn to talk, walk, or run your way out of a bad situation before it escalates into a really bad situation.

3) Get some good OC and spray and see how your particular unit works. Get a training unit at the same time and practice some drills with a friend or friends.

4) Get yourself to a practical self defense class and learn hand striking, kicking and even some standup and ground grappling. Lose weight, gain muscle, gain confidence, work some limited Force on Force drills on resistant opponents.

5) Get a 5 or 6 shot revolver, a used Makarov, a brand new Glock or whatever. Practice with it semi regularly, carry it whenever possible. Get a pump shotgun for the house for heavy artillery. If you live in some rathole that doesn't allow this, then move. I file such locales under "stupid places" as mentioned in point 1.

6) Un-fuck your finances. Come up with a do-able debt reduction plan that you can manage to stick to.

7) Get 3-plus months worth of food, emergency cash and supplies stored up. The world might not come to an end, but your job sure might.

8) See your doctor and dentist regularly

9) Carry a flashlight and a knife or multitool. You'll be amazed at how you ever got along without them if you never did before.

10) Get your house/apartment as secure as is feasible. If there are blind spots, fix them, if the locks suck, fix them. A dog is one of the cheapest alarms you can install.

11) Take some Red Cross CPR and First Aid classes. Go for EMT if you have the time/money. Carry a small, realistic first aid/trauma kit in your car or on you if you carry shoulder bag, backpack or attache case for work.

I'd rate all of those higher than running around with a $2,000 rifle, however much fun that can be. Also much more practical than taking a ‘Civilian Counter-Terorist Course from your local “Tier 1 Operator Style” instructor, and far better than worrying about commie blue-helmeted zombie hordes, and it will make you that much more of a self sufficient individual should such circumstances arise.

Posted by Blackthorn D. Stick at 7:42 PM No comments:

Ever Wonder Just How Strong Your Passwords Are Against Hackers

This Should be quite the reality check; 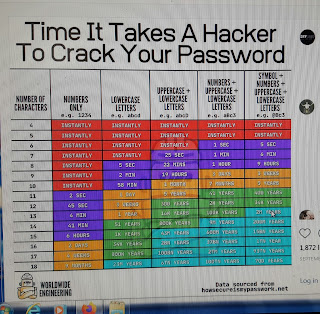 Posted by Blackthorn D. Stick at 1:16 AM No comments:

May he be Shaken, But not Stirred!
Posted by Blackthorn D. Stick at 3:01 PM No comments:

Combat Stickwork Vs. Popular "Stickfighting" in the Martial Arts

Many people are engaged in training in such arts as Filipino "escrima" or "kali", and Japanese "jo jutsu" and "bo jutsu". While all of these classical/traditional stick arts are beautiful and worthwhile studying, they are not necessarily the best choice when it comes to practical combat and personal self-defense needs. As martial arts (emphasis upon the "arts") no one can fault traditional methods. But as martial arts (emphasis upon the "martial") there is a lot of room for improvement.

Get hold of a copy of Fairbairn's GET TOUGH!. Study the description Fairbairn gives of his excellent stick technique. Now THAT'S how we use a stick in combat. Or, pick up COLD STEEL, by John Styers. His well illustrated instruction in the Marine Corps' "Kengla Technique" also provides a glimpse of how — in real, honest-to-goodness hand-to-hand combat — we use a stick against an enemy.
For combat the stick is used with extreme aggression, and it capitalizes upon the element of surprise. There is no twirling, and there is no two-stick style. Nor is there competition. One ATTACKS.

Both the Fairbairn and the Kengla techniques are taught in their complete forms in American Combato (Jen•Do•Tao)™, and we include dozens of other excellent techniques and stick tactics — all combat-worthy. At Black Belt, 1st degree, we teach a syllabus of thirty(30) super-destructive stickwork maneuvers. But you don't need to study with us to acquire all that you might have need for in an emergency. Just remember: Keep it simple. Attack by surprise. Use every ounce of ferocity and determination you can generate. Move in! Keep on attacking! Go for the enemy's most vulnerable, vital points. And, for heaven's sake do not forget to first acquire basic unarmed combat skill. The stick, like any other hand held weapon, should be utilized as an adjunct and an extension of your body's natural weapons, and your combative mindset.

We have always liked the English or the Irish Blackthorns. However, any stout hardwood walking stick (not a hiking stick, but a cane-length walking stick) will do admirably. Skill is demanded, of course, in order to fully exploit the weapon's potential, — but assuming that the reader understands this and is prepared and willing to train and to practice, he should obtain a plain, hardwood walking stick, or a good, stout Blackthorn.

Question" "How about a ‘cane'? Wouldn't the crook on the end permit some excellent additional techniques to be employed?"

Answer: We would strongly advise that a cane per se not be chosen. The cute tricks of catching an enemy's wrist or ankle when he kicks or punches, or hooking him behind the neck and throwing, etc. look great in demonstrations and in dramatic photographs that have been carefully taken for martial arts magazines. However, such techniques are nearly impossible to use for real, and the crook-necked cane is much less versatile than the plain walking stick. Locking up with an attacker (when utilizing a cane, just as when utilizing bare hands) is suicide if and when multiple attackers are encountered. The cane is also poorly balanced for speedy combative skills manipulation. Go with a hardwood walking stick, or a good, stout Blackthorn.

Posted by Blackthorn D. Stick at 9:02 AM No comments:

Stickwork - An Article by Brad Steiner

Another article by Brad Steiner on the use of a stick for Self Defense. Originally published in Guns and Ammo Magazine (I believe it was in the Personal Defense Column) sometime back in the 1980's. I also believe a slightly altered version appeared in one of the old Cold Steel Printed Catalogs in the early 2000's. © COPYRIGHT 2008 BY BRADLEY J. STEINER - ALL RIGHTS RESERVED.

The stick is a marvelous weapon. Back in the 80's we wrote an installment of our (then) monthly feature article in a major firearms publication entirely devoted to the stick — the walking stick — as a weapon of self-defense. The article was well received, and in it we were concerned to emphasize all of the great virtues of the walking stick as a self-defense weapon. Among these virtues are —

The walking stick is, even in such oppressive environments as Red China and Russia, completely legal. It would be difficult to imagine "outlawing" the walking stick, since it is a utilitarian item that many people need and carry for medical reasons.

While the stick is not normally employed with lethal intent, it certainly can — in trained hands — speedily enable its possessor to drop the most dangerous individual, lethally, in a life or death encounter. The stick allows the user to inflict crippling or/and extremely painful and debilitating injuries, and to do so rather simply, and with only marginal physical strength.

"Speak softly and carry a big stick." Teddy Roosevelt's advice, taken literally, makes excellent sense. For with a stout walking stick in hand, and the ability to use it well as a weapon, anyone may be confident of his ability to handle trouble, and may thus "speak softly", indeed.

A man who is in possession of a walking stick, and who does not appear to actually need it in order to assist him in locomotion, sends a clear and unmistakable message to any potential physical attacker: "Not this particular individual! This one's got a weapon!"

The stick can punish, damage, or kill. It extends the reach of its user, and it bolsters all unarmed combatives. It never runs out of ammo, makes noise, jams, or is awkward to keep near at hand — conspicuously. The stick delivers hard, destructive jabs as well as smashing blows. When using certain techniques it can cut and slash, and it does not represent a danger to the user or to innocent people in the vicinity, when it is correctly employed. It would be very unlikely that a normal walking stick would be banned for carrying onto an airline.

Learn how to use the stick in combat, and you will almost never be in a position where some stick, or stick-like implement, cannot be found, made, or improvised.

Posted by Blackthorn D. Stick at 9:32 AM No comments: